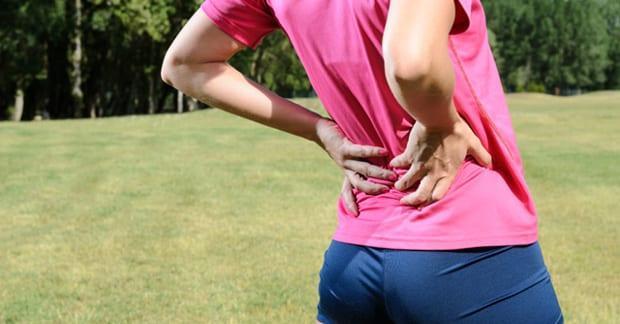 Low back pain (LBP) can result from many causes, and sometimes it just occurs for reasons that are not clear, such as the accumulation of stresses that occur over time. Many causes of low back pain have been described such as bending over “wrong,” combined bending and twisting, lifting, over reaching, climbing, sitting too long, repetitious activities at home or work, sports injuries, being out of shape, and so on. But what about balance? Because poor balance leads to falling, which is the #1 cause of injury in the elderly, ANYTHING that we can do to improve our balance should help prevent falls and hence low back injuries. Let’s look at strategies to improve our balance…

First, let’s measure our ability to balance by using a simple test you can do yourself. Stand on one leg in the corner of a room or in a doorway where you can easily grab onto something if you feel like you’re going to fall. Try to do this without holding on to anything, first with your eyes open and a second time with your eyes closed. If you have a stopwatch, click it when you start and stop (when you put your foot down). Otherwise, count, “…1001, 1002, 1003, etc.” Studies have shown that for those under 60 years old, you’re “normal” if you can balance on one leg with your eyes open for 30 seconds and 25 seconds with your eyes closed. Between ages 60-69, normal is 23 sec. (eyes open) and 10 sec. (eyes closed). If you’re 70-79 years old, normal is 14 seconds (eyes open) and 4 seconds (eyes closed). Give it a try! Notice how “normal” drops as we age. From 25 sec. to 4 sec. between age 59 and 70 is pretty dramatic! No wonder falling is so common among the elderly!

So, now that you’ve tested yourself, I’m guessing you aren’t too impressed with your balance skills. The question now is, how can we improve our balance? Performing balance exercises with a rocker, wobble board, or cushion is VERY EFFECTIVE! You’ll be surprised that if you use this for ten minutes a day, the improvement in balance is significant after just two weeks. Another method takes no effort at all on your part, and that is the use of custom made foot orthotics. Simply known as arch supports, foot orthotics (the good “prescription” kind) correct the rolling in or out of the heel bone, referred to as pronation (rolling in = most common) or supination (rolling out) by wedging the heel of the orthotic/arch support. This stabilizes the ankle joint, reduces the inward or outward shift at the knee and hip joints, and as a result, improves balance.

In a 2012 report, researchers studied 13 subjects over 65 years of age who reported at least one unexpected fall in the past twelve months and measured their balance skills using a similar test as the one you just tried as well as three other tests (tandem stance, tandem gait, and alternating step tests) twice before and twice after starting use of custom foot orthotic intervention (immediately after and two weeks later). In each of the four balance tests, they observed statistically significant improvement in the post-tests and follow-up tests PROVING that balance is effectively improved when wearing custom made foot orthotics. Combining BOTH the exercises and the use of custom foot orthotics may even lead to better results. Since falling is such a common occurrence at any age, especially in those over 60-65 years old, these simple strategies seem like a “no-brainer” to implement into a treatment program, especially for people with poor bone density at high risk for fractures.