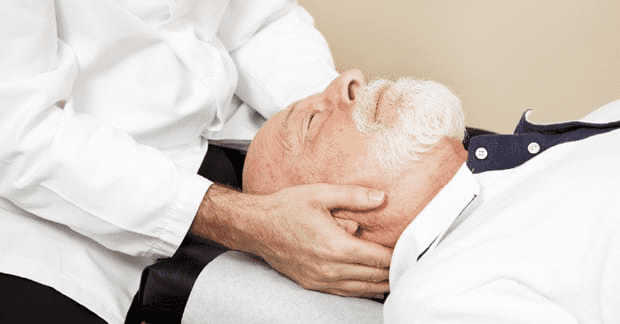 Does mobilization (MOB) get less, the same, or better results when compared to spinal manipulative therapy (SMT) when it comes to treating neck pain? To answer this question, let’s first discuss the difference between the two treatment approaches.

Mobilization (MOB) of the spine can be “technically” defined as a “low velocity, low amplitude” force applied to the tissues of the cervical spine (or any joint of the body, but we’ll focus on the cervical region). This means a slow, rhythmic movement is applied to a joint using various methods such as figure 8, side-to-side, front-to-back, and /or combinations of any of these movements. In the neck, gentle to firm manual traction or pulling, when applied to the cervical spine, stretches the joint and disk spaces and can be included during MOB.

Spinal Manipulative Therapy (SMT) can be defined as a “high velocity, low amplitude” type of force applied to joint which is often accompanied by a audible release or “crack,” which is the release of gas (nitrogen, oxygen, and carbon dioxide). Some joints “cavitate” or “crack” while others are less likely to release the gas. Studies that date back to the 1940s report that an immediate improvement in a joint’s range of motion occurs when the joint cavitates. Many people instinctively stretch their own neck to the point of gas release, which typically, “…feels good.” This can become a habit and usually is not a big problem. However, in some cases, it can lead to joint hypermobility and ligament laxity. As a rule, if only a gentle stretch is required to produce the cavitation/crack, it’s typically “safe” verses the person who uses higher levels of force by grabbing their own head and twisting it beyond the normal tissue stretch boundaries. The latter is more likely to result in damage to the ligaments (tissue that strongly holds bone to bone) and therefore, should be avoided. Since SMT is usually applied in a very specific location (where the joint is fixated or “stuck” or partially displaced), it’s obviously BEST to utilize chiropractic, as chiropractors do this many times a day (for years or even decades) and know where to apply it and can judge the amount of force to utilize, especially the neck where there are many delicate structures.

Back to the question: Which is better, MOB or SMT? Or are they equals in the quest of rid of neck pain? A 2012 study that included over 100 patients with “mechanical neck pain” (strain/sprain) found that those who received SMT had a significantly better response than the MOB group as measured by a pain scale, a disability scale, and two tests that measure function! So, the next time you ask the question, “….do you have to crack my neck?,” the answer should be “yes, if you want to achieve the quickest response.” However, if there is sharp pain during the “set-up” of the manipulation or adjustment, modifications in the technique are appropriate or a different method should be considered.