The Benefits of Blocking Blue Light 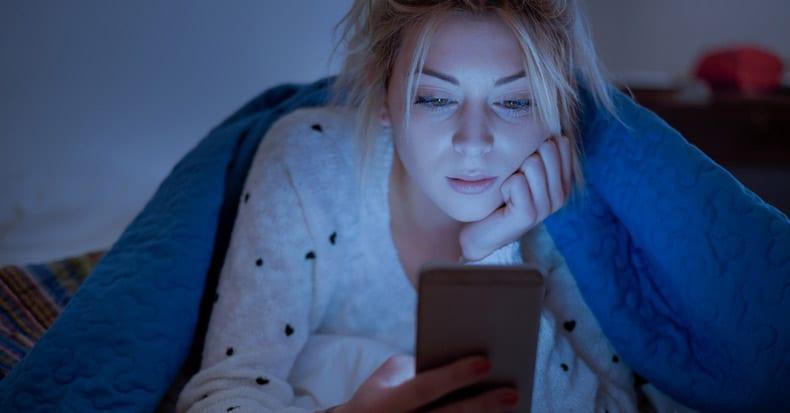 The electromagnetic spectrum spans from gamma rays—which can be deadly—to the radio waves that flow in the air all around us without any effect. Between the ultraviolet and infrared sections of the spectrum is the most important wavelength for our eyes: visible light. But research indicates that blue light can be problematic in high doses—especially with our increasing use of electronic devices.

Both the sun and incandescent bulbs emits light in a broad range that our eyes have evolved to see. The light that emanates from our electronic devices may appear similar, but it’s concentrated in three main peaks of blue, green, and red. When using a phone or tablet, that means a greater than average amount of more energetic blue light is being sent to your eyes at a short distance and for (often) a prolonged period of time. Researchers have observed that this can cause the eyes to grow tired and dry out, which can lead to discomfort. Exposure to blue light at night can slow the production of the sleep hormone melatonin, resulting in sleep difficulties and the negative health effects associated with it.

To reduce the consequences of excessive blue light exposure, several tech companies have created blue light and nighttime filter settings that reduce the amount of blue light that comes from devices. Many websites and programs also offer a dark mode that reduces the amount of white on the screen, which means less light is emitted by the diodes. Users often report that these features are easier on the eyes.

While there is debate on the topic, excessive exposure to blue light may also lead to an increased risk for macular degeneration, a common cause of vision loss associated with damage to the photoreceptor cells in the retina. In laboratory studies, researchers have observed that when blue light interacts with the molecule retinal, it can lead to cell damage and even cell death. This effect did not occur with other forms of visible light. However, it’s important to note that this study was conducted in a laboratory setting and not on eyes themselves, so although the authors found a mechanism by which blue light plus retinal can cause cell damage, they’re not sure if this occurs in the eye itself.

Nonetheless, given the effect that prolonged screen use can have on eye fatigue and possible sleep interruption, it’s important to take breaks to rest the eyes and use filters or modes that reduce blue light (or wear glasses that block blue light).